One of the best Cuban Bands in Havana!

Young artist, musician of unequaled talent, worthy and faithful exponent of Cuba in each of his works. Belonging to the generation of Cuban musicians who opted to defend the values ​​of Cuban popular music, while continuing to renew it with a refreshing contemporary sound, making him a unique artist in his class. Maykel Blanco, without a doubt, has achieved with his art and work occupy a prominent place of reference within the Cuban and international musical sphere.
He is distinguished by his high sensitivity and a special human simplicity. In addition, he is not only loved and admired by the people of all generations, but also by musicians who are joined by performers of various genres in our country and abroad. Thus conquering followers all over the world.
Maykel was born in San Leopoldo, a neighborhood of the Centro Habana municipality in the Cuban capital, on January 21, 1981, the year that began a decade of splendor for Cuban popular music. He tells his story that in his childhood home there was a lot of dancing. His parents and uncles belonged to the emblematic troupe “Los Guaracheros de Regla”, an environment in which little Maykel was raised. At an early age he became very interested in music, drawing his attention and following in his footsteps, nothing more and nothing less, than “Los Tambores de Bejucal”. Out of his admiration for this highly prestigious Cuban group, he decided on percussion.

So much energy and concerns for the art of sounds, led him to create his first musical group named “Sambra” when he was only 16 years old, where despite being a fan, he achieved several recognitions at important events and festivals.

With an academic training at the Guillermo Tomás Music Schools and the Amadeo Roldán Conservatory, at the age of 17 he joined the orchestra “Abel y la Seducción” and a year later created, “Suprema Ley”, thus starting his outstanding career professional.

At this stage, due to his talent, he arouses the interest of the Spanish record label Envidia Record with which he signed his first international contract. With this record company, he managed to produce more than ten phonograms for his group and various other artists, including Tirso Duarte. He also participated in the recording of 40 albums as a percussionist in various productions and created music for various “Latin Jazz” groups, such as “Havana Express”.

Impatient, given his youth, with a desire to give more and experiment with new musical ideas. Maykel, decides on October 10, 2004 to make his big debut with his new orchestra “Maykel Blanco y su Salsa Mayor”, made up of talented musicians, graduated from various art schools in the nation.
Since then and up to the present, he has devoted all his energy, creation and musical talent to this interesting project. Thus, allowing his professional career to continue on the rise, as a pianist, percussionist, composer, music producer, arranger and cultural promoter. Thus reaching a high level of popularity and prestige, in Cuba and the world.

In his career, this author has gifted us with themes such as: “Pick up and go”, “Go and hit yourself”, “This is it”, “Whenever it rains it clears”, “My mulatto in Havana”, “I am what pulls you ”,“ Chaca Chaca ”,“ Ya tú no coronas ”,“ Te escapaste ”,“ Tremenda pinta ”and many more that have been on the list of national and international radio and television hits. Maykel, also has in his career as a composer with more than 300 pieces of his authorship.
The director of Salsa Mayor, has also managed to place his group, in a top place along with others of great popularity. Precisely for having achieved a sound that distinguishes it and the innovative arrangements that it cultivates, without ceasing to cling to the roots of Cuban music such as: son, songo, timba and the fusion of contemporary rhythms and genres of which it has been used to enrich his work.
In the same way, Maykel Blanco, from the Envidia Record, Planet Record, Bis Music, Unicornio Label and his own MB Record label created in 2017, has recorded three DVDs: “Cerrando Filas”, “Soy Lo Que Hala Te Hala ”and“ We Are Seniors ”. On Blu Ray Disc he recorded “Que No Me Quiten la Fe” and 11 more phonograms, among them: “De Prado A Manrique” with Havana Express, “Se Te Olvidó Quien Eras” and “Ya Llegaron Los Cubanos” with Suprema Ley, “ Pick up and go ”,“ Pick up and go live ”,“ Go and hit yourself ”,“ I am what pulls you ”,“ Full throttle ”,“ Don’t take away my faith ”,“ We ​​are Seniors ”and“ What has that moves you ”with Salsa Mayor.

Protagonist of national and international tours that cover stages in more than 90 countries. On his tours he has performed in Asia, Europe, North America, Central America and Latin America, where the critics have been favorable to him. He has been the winner of relevant awards, among them it is worth highlighting: Best Cuban Timba Group in Italy 2006-2007; Revelation Group of the Year 2008 in Peru; Concert of the Year in Paris in 2008; Top sales album Tropical on the ITUNES site with its production “A Toda Máquina”; Popularity Award, Best Song of the Year and Best Album of the Year in Peru in 2013; the award for the Best Cuban Popular Dance Music Concert in Paris. During 2019 he was Artist of the Year and Record of the Year in Peru, Best Popular Dance Song in the USA, Artist of the Decade of the Cuban radio program Juventud 2000 and Best Orchestra on Italian radio Radio Mambo. In addition, it has been placed since its debut year after year themes in the Hit Parade of radio and television in Cuba. Not to mention also that he has shared the stage with Oscar D´ León, José Alberto ¨ El Canario, La India, Gran Combo de Puerto Rico, Grupo Niche, Willie Colon and Luisito Carrión, among others. Giving proof that in a short period of time this young Cuban musician has reached his artistic maturity.
As if the above were not enough, the intense creative work and musical concerns have made the director of Salsa Mayor a successful cultural promoter. Due to these values, he decided in 2015 to create the International Salsa Festival in Cuba, which has been attended by more than 20 thousand dancers from all latitudes, making this event a giant pride and celebration of Cuban music.

The Festival, in which Maykel assumes the Honorary Presidency of its Organizing Committee, has become one of the most important in Cuba. Since its first edition, among its main attractions, it has a luxury program in which the most popular Cuban orchestras participate and that cultivate the genre with unquestionable quality. At the same time, it constitutes a space in which the theoretical and the practical merge, having dance workshops and Cuban rhythms. In addition, there are visits to art schools, carnival shows, presentations by highly prestigious international DJs and dancers who show their Cuban art and masterfulness. This dream of the author of “Pick Up and Go”, has become a comprehensive project, alive and in a perfect state of development. It has managed to count on international figures of the stature of Jerry Rivera, Víctor Manuel; among others. Many interested in dancing and enjoying the rhythms born in the largest of the Antilles, come, from different countries of the world, to the convocation of an integrating arts festival, which is undoubtedly here to stay.
In the same way, in these difficult times of the COVID 19 pandemic that has been affecting us worldwide, Maykel Blanco has not stopped creating and evolving Cuban music, as a composer he has written songs for relevant artists of the stature such as Haila Maria Mompié, Manolito Simonet, Tania Pantoja; Under his record label, he has collaborated with the production of other artists together with Maestro Adalberto Álvarez with a beautiful and integrating project called “Alianza Musical” where different concerts are currently being produced with the most representative artists and orchestras of our island.
As part of his continuous and arduous musical performance, the director of Los Mayores has been performing a Mano a Mano with Alexander Abreu and Habana of the first called “Mayores de Primera”, having as a special guest the emblematic orchestra of Cuba Los VanVan, which in the media it could become the event of the year for this genre.

In this 2021 Maykel is designing a strategy for the launch of his Mini LP “Enfocado” in co-production between the MB Record and Unicornio labels, which has 6 songs, where 5 are his own and one corresponds to Jorge Díaz; From the aforementioned CD, two singles have been released, one “Pa los Mayores y Los Van Van” and “Ella Dice” both with great popular acceptance and recognized in different charts. He has also been working on other albums as an arranger, composer and music producer with dissimilar performers of different genres such as Pancho Céspedes, Polito Ibáñez, Luna Manzanares, Mandy Cantero, Alexander Abreu, Leo Vera, Norisley Valladares (El Noro), Emilio Frías (El Niño), among others.
Stage mastery, professionalism, unquestionable results and above all passion for Cuban music of which he is one of its most faithful exponents. They play Maykel Blanco, a consecrated musician and followed by several generations of Cubans. Not by chance, he is leading one of the most popular and popular orchestras in Cuba and the world. In addition to forming for some years, an essential part of Cuban musical history and culture. 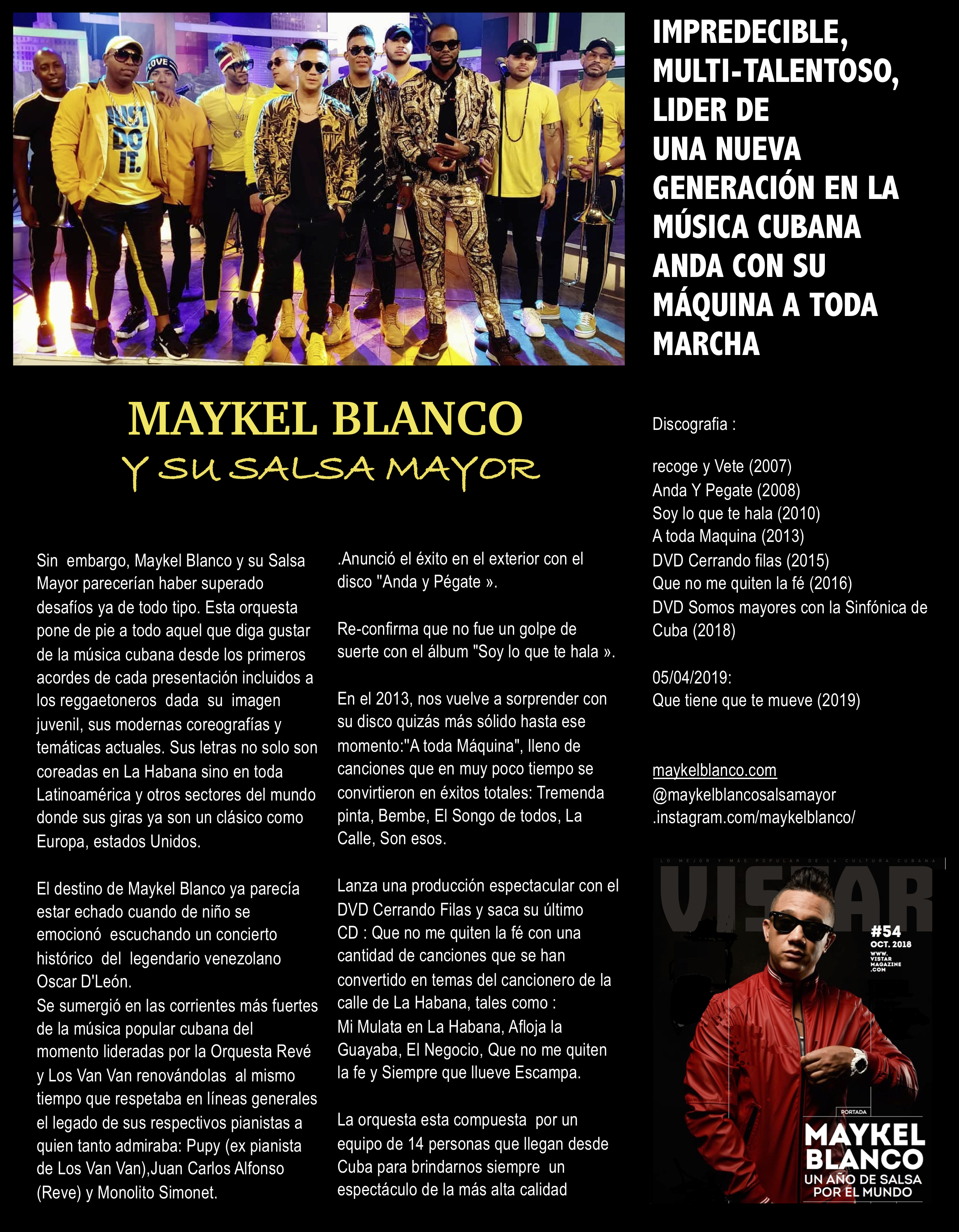 One of the best Cuban Bands in Havana!